How I Lost Weight Without Really Trying

Half of the people who are reading the title of this book I Lost Me Britches – How I Lost Weight Without Really Trying are thinking, Oh sure! I’ve heard that line about losing weight before! I’m not going to fall for that scam again. This is just some ad for a diet-pill or for a weight-loss program.

The other half of the people who are reading the title are thinking, Well sure, losing weight is really easy for some people. But it’s never easy for me!

But you, oh Most Astute Reader; yes, you are thinking that there really must be something to this. And you know, beyond all knowing, that there is a secret in this book that only you will find out. And that secret, oh Wise One, will enable you to lose weight, simply, honestly, and best of all, with little effort at all.

So to you, Most Savvy Reader, read on!

This is the true story of how I lost weight 30 pounds and 4 inches (off my waist) in 9 months. I did that by practicing a little known secret. Well it was little known to me at the time. I also discovered other secrets along the way which will help me keep that weight off forever.

If you’re ready to join me in the community of lesser selves, buy my book. https://www.amazon.com/Lost-Me-Britches-Weight-Without/dp/B083XT1J8W
You know you want to.

Here’s the late night blogger, blogger another of his famous or is that infamous blog posts. Are you still up? Shouldn’t you be in bed? Only one more blog post. Please!

Well, I suppose it’s alright this time, but don’t make a habit of it! Sheesh! My conscious is really a nag tonight (no offense to horses). Aren’t you finished yet? Almost! I’ll just be a little bit longer.

So, tonight I made Applebrosia – first try. It’s my own invention (I think). Make an applesauce version of Ambrosia. I still had a bag of frozen apple chunks from last years mega harvest. So I threw those in the water/lime juice mixture. However they’re better for juice than apple sauce. So I bought some organic apples from the store – a couple of Pink Ladies and a couple of Cameos – they looked like they would sauce up nicely and they did.

While the frozen apples were thawing in the boiling water, I peeled and sliced the other apples into the mix. I like a few large chucks of apple in my applesauce, so I didn’t slice them too small. The frozen apples would probably mostly smoosh up.

Then I threw in some Medjool Dates. I might have gone for a different variety, but that was all the co-op was selling. I might have gone with Deglot Noors or Khadrawy which are not quite so sweet. I pitted and chunked the dates before throwing them in. I should have also pulled the skin off. As it was I kept pulling out bits of date skin and throwing them in the compost bin (a yogurt container). At first I kept thinking I was finished and so kept sticking the closed compost bin back in the fridge where it stays so the food doesn’t rot too fast in yet. That keeps it from smelling so much. And I’d rather not mix the smell of compost with the smell of food that I’m about to eat. After a few minutes in the fridge, I had to pull the compost bin back out because I’d found another piece of date skin. The compost bin could stay out of the fridge for a bit. There wasn’t anything in there which was going to rot that quickly. I could have left in the bits of date skin – they’re easy enough to eat. But they looked weird.

Then after the apples had finally turned to sauce – it took them long enough! I threw in some bits of dried fruit I’d bought – Kathy’s brand. This was freeze-dried pineapple and mango. I could have saved some money and bought a fresh mango and frozen or canned pineapple. However, I was originally going to throw in some organic marshmallows. But that’s too much sugar for me. So when I saw freeze-dried fruit which is kind of marshmallowy in texture, I went for it.

I later thought that I probably should have thrown the freeze-dried fruit in after the sauce had cooled down, perhaps even after it had been in the fridge. But the fruit was still chewy an hour later – of course the applesauce is still cooling down, so that may change.

Ambrosia usually has citrus fruit in it including oranges (or mandarins or tangerines). I opted to leave out the oranges even though I still had one tangerine in the fridge. For one thing I would have had to check for seeds.

Every other year I get a bumper crop of apples from my two trees. Often, when that happens, I make them into gourmet applesauces – think Chocolate Toffee, Lavender, Peppermint, etc. I’ve published the recipes for many of those in my book Strawberry Cheesecake Applesauce – yes, that’s one of those gourmet flavors.

Well, perhaps it’s not the end. Perhaps it’s only the beginning of the end. Hawaii is considering a ban on plastic straws. Some hotels there have already banned them. Seattle’s ban starts June 1. McDonalds considered a ban, however shareholders rejected that proposal.  Alaska airlines is banning them. Paper, aluminum, glass, and bamboo straws are available . Malibu also passed a ban on plastic straws and New York City may be next.

If you want to start your own ban, paper straws are readily available, just search the internet for them. The first few places I found selling paper straws were Aardvark Straws, Shops Sweets and Treats, and Just Artifacts. Aluminum straws are available at Amazon or Caribbean Creme. Glass straws are found at Hummingbird Straws, Simply Straws, and Strawesome. Bamboo straws are at Bambu Home, Brush with Bamboo, and Life without Plastic. Life without plastic also sells glass and stainless steel straws. They also sell a cleaning brush for straws. I know from experience that you can’t get a straw clean just by running water through it.

Alternatively, you could just do without a straw though it might be harder to drink that milkshake or smoothie without one. Actually, it won’t be harder; but it might be a bit messier.

And why ban plastic straws? They often end up as part of those plastic oceans which now cover vast portions of the ocean.

I got an idea for making Blackberry Forest Applesauce.
Blackberries, Dark Chocolate, Blackstrap Molasses and anything else black I could find to put into it to go along with the Blackberry Forest theme.
So I googled Black Foods – Squid Ink was all I found. Blackberry juice is purple, not black.

So, I went to the grocery store for blackberries – frozen, since it was winter. The closest thing they had was frozen mulberries – close enough. I didn’t have molasses at home, but I did have coconut syrup which was pretty dark and would be a good substitute (unless you really want molasses flavor). Dark Chocolate – check. Frozen Apples = Check. Buy Pecans.

The mulberries made the applesauce too runny, so I ended up adding Chia after all. After it thickened up, I added the pecans, placed it in a jar and placed 3 pecans on top for show. It was a big hit.

For more of my Gourmet Applesauce recipes, see my book Strawberry Cheesecake Applesauce. 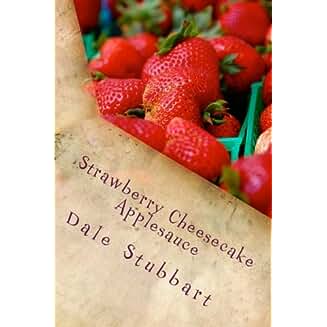